The Florida Academic Library Services Cooperative would like to give your institution the credit it deserves. We’re happy to share news of special events, improvements, and achievements from the libraries of our state’s public colleges and universities.

Just drop us an email

INSTITUTIONS IN THE NEWS

Service learning is an educational approach that combines learning with community service. The concept behind “IRSC and the Digital Archive: Digitizing Local History" is that students get practical experiences in the digital humanities, while also serving the community, by making archival sources available to researchers and the public.
LEARN MORE 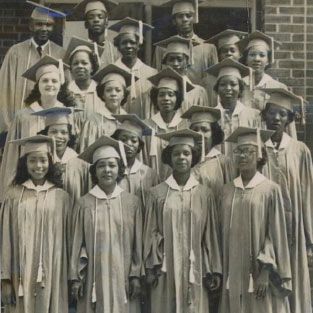 An Anniversary and a Grant

The 2018 to 2019 academic year was the 70th anniversary of Pensacola State College (PSC) opening. In honor of that anniversary, the library set out to showcase college history. A main goal was to allow alumni and the public to be able to access PSC's history materials without having to physically travel to campus.
LEARN MORE

From UF -  $1.2 Million Digization Project Expands Access to Newspapers in Florida and the Caribbean

The Florida & Puerto Rico Digital Newspaper Project (FPRDNP) has officially come to an end. A collaborative $923,000 project between the University of Florida (UF) George A. Smathers Libraries and the University of Puerto Rico-Rio Piedras (UPR-RP) library system, the FPRDNP has provided access to hundreds of digitized pages of historic newspapers from Florida and Puerto Rico that were previously found only on microfilm.

Though the FPRNDP has ended, newspaper digitization efforts for the state and its Caribbean partners continue. In August 2019, the National Endowment for the Humanities (NEH) awarded the UF Libraries $309,000 (bringing the project total to over $1.2million) to continue its digitization efforts alongside UPR-RP under the US Caribbean & Ethnic Florida Newspaper Project (USCFNP). This new collaborative project builds on the efforts of the FPRDNP to continue digitizing historic newspapers from the territory and state, with a focus on digitizing ethnic newspapers from Florida. The USCFNP also expands the scope of the FPRDNP to include digitization of historic newspapers published in the Virgin Islands with the help from a new partner, the University of the Virgin Islands (UVI).

The USCFNP will run from September 2019 to August 2021. All digitized content will be text-searchable and freely accessible in Chronicling America (https://chroniclingamerica.loc.gov/), a site created and maintained by the Library of Congress for the National Digital Newspaper Program, as well as via the Florida Digital Newspaper Library (https://ufdc.ufl.edu/fdnl) and the Digital Library of the Caribbean (https://dloc.com)

The tradition of giving back to USF started before the University of South Florida opened its doors, when in late summer 1960, the USF Women’s Club held their first meeting.

Grace Allen, wife of USF’s founding President Dr. John Allen, hosted the meeting in her home as a way to invite women at the University, particularly non-working wives of faculty, to participate in supporting USF. This was during a time when many women didn’t work, and the club’s dual social and service roles gave women an opportunity to connect and enhance their relationships on campus.

Initially, the club was mostly social, with hundreds of interest groups to choose from (e.g. bridge, bird watching, supper, etc.) but it always had a service feature. Their fundraising initially supported student book scholarships and now supports so much more.

“Well, you give a book scholarship that lets one person buy books, but if you give to the library, then many people can use the books….” – Susan Vastine, former USF Tampa Librarian and Women’s Club member since 1965 (Oral History Interview, University of South Florida, USF Women’s Club Collection)

The club created an endowment in Allen’s name, the Grace Allen Library Endowment, to support our Libraries in 1992, and over the many years, has purchased many technologies, room renovations, scholarly materials, and more to support instruction and research. They have an additional endowment, the Grace Allen Scholarship Fund, that awards several full-tuition scholarships to non-traditional-age students every year.

“Since the USF Women’s Club was founded nearly 60 years ago, our purpose has been to enhance the University community through service projects. Helping the Library is essential to raising the stature of the University itself, and we maintain a Library Endowment. More than that, we take a great deal of pride in seeing how our support of the Library helps improve the students’ quality of education.” – Rose Killinger, USF Women’s Club member since 1987

Some of the club’s library endowment purchases have included the Book Review Index Online Plus, an electronic digital resource of over 1.2 million book reviews dating back to 1983, and the Tampa Library’s digital display boards on the 4th and 5th floors, helping our faculty, staff, students, and visitors stay informed on Library happenings, events, and collections.

The operating fund the club established in 2016 specifically supports the Grace Allen Room (GAR), the 4th floor conference space dedicated to their founder. The room offers presentation systems that include a projector, lecture podium, microphone, and wireless touch screen.

“Our main purpose is raising money for scholarships, and, having fun too. And several years ago, we started an endowment fund for the Library, and we raised funds for some of the stuff in the Grace Allen Room.” – Sandie DeSalvo, USF Women’s Club member since 1983

We here at the USF Libraries are grateful for the years of continued support from the USF Women’s Club, and are proud to host their club archives in our Special Collections – which include yearbooks, meeting minutes, articles, and other ephemera available for research and instruction.

The club welcomes new members, and general meetings are held on campus. Social engagements, such as book group, supper club, and bridge, are hosted off campus. For more information contact usfwc1960@gmail.com.

Thank you USF Women’s Club for all that you do for the University of South Florida and for giving our #LibrariesLove!

From UCF -  Their 21st Century Library!

Phase IA planning took several years and included feedback from students to address many needs including:

We hope this space will be enjoyed by the UCF community for many years to come.  Stay tuned for opening announcements this spring!

During the past legislative session, House Bill #525 was introduced, passed, and signed into law renaming two of Florida's State Colleges. Effective July 1, 2019, Florida Keys Community College will now be The College of the Florida Keys and North Florida Community College will now be North Florida College. These name changes were requested by their respective Boards of Trustees to in order to better reflect the coursework and degrees currently offered at their institutions.

The new L. Gale Lemerand Student Center opened on March 18, 2019 as scheduled.  It is an eye catching, three-story, 84,000-square-foot, state-of-the-art facility.  The building sits at the main entrance of Daytona State College.

We are very excited to see students engaging with one another.  One student views the Student Center as a “college playground” where they can be in contact over breakfasts, lunches and/or snacks. 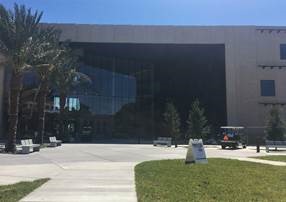 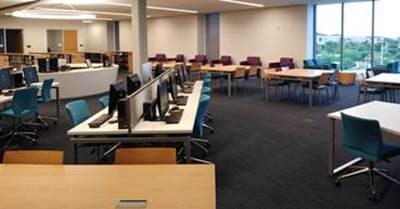 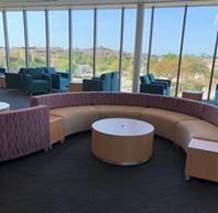